When It's Not All Black and White

When Lucy was finally diagnosed with Elhers Danlos Syndrome back in May this year we felt a sense of relief. Not because we knew she was disabled and her disability had a name, but we believed that now she would be treated correctly by doctors and nurses if anything went wrong again.

How foolish were we!

Elhers Danlos Syndrome is a connective tissue disorder which means things inside the body, bones and joints for example, may move out of place without the usual force required. In simple terms, someone with EDS can dislocate their ankle without having a fall or accident.

When Lucy first hurt her neck we took her to the GP in the first instance and then to the hospital. We knew someone was really wrong. However, because she'd not suffered any trauma, fallen or had an accident, they would not believe that anything serious was going on and were reluctant to even check. This was something I overheard repeatedly. So, on our third visit I may have just mentioned a fall off her scooter. It wasn't a lie, she did fall off her scooter some three weeks before and bruised her knee. As soon as I said that things changed and she was sent for a CT scan. Then they found the misplaced joints and finally began treating her instead of saying give her painkillers and she'll get better.

Unfortunately the scooter thing stuck. Even when I admitted to the consultant that I had stretched the truth and she hadn't hurt her neck falling off her scooter, he couldn't accept it. No-one dislocates their neck without a trauma, but it is possible with a condition like EDS.

This week Lucy has had a painful ankle. Now, it's really not unusual for Lucy to feel pain in her joints, it's something she's had time to get used to as she's had it all her life. However, with a little massage, some painkillers and occasionally a wheatbag the pain subsides, or at least gets better. This week her ankle has not got better and we are now on to the fourth day of pain with no improvement. This is really unusual so of course we worried.

It may be that this pain will go away and not be anything serious. I really really hope it does, I hate to see her suffer. She can still walk and move her foot and she has no swelling or bruising. No signs of trauma, but then she doesn't remember any trauma. We have to hope the pain will ease and things will be fine.

I don't want to take her back to A&E but if I do you can be sure I'll be telling them that she has fallen because having EDS doesn't mean anything. 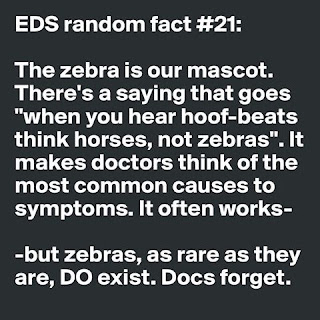