Another Appointment with the Poo doctor!

I never feel really comfortable talking about poo, and yet it seems to dominate my life!
This week we had another visit with the gastro doctor at the Children's hospital. It was a 6pm appointment just 3 days before Christmas, so we went into town early to have a browse and look at the decorations. The kids were not really all that interested though, but it could have been because of the rain. We did go into the church and light some candles for lost family members, including the two cats this year. The kids loved the nativity scene, despite the characters not having faces. 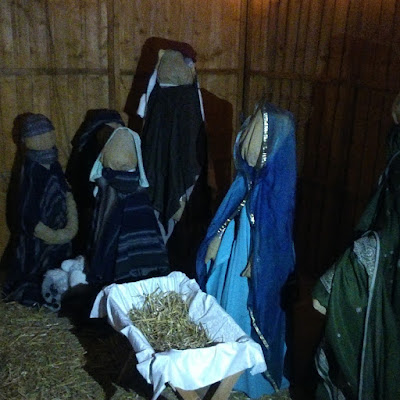 Anyway, onto the appointment. Back in October, Lucy was put on a high dose of Movical to clear her out. We didn't manage to get it to work. It took five days before there was any sort of result at all and then the school break was over and I didn't want to risk her getting loose while at school so I stopped giving it to her. So, now it's the Christmas holiday and she has two weeks before she goes back to school so we are going to try again, but with an even higher dosage. It's going to be a smelly Christmas. She also has to go back to the hospital for blood tests next week. The Dr wants to rule things out to find what her problem really is. Lucy isn't happy as she has developed a real fear of needles, but I'm sure we'll get through it somehow, perhaps with some bribery.

In other news, Lucy's class is going on a residential trip in the summer. It's not the first time she's had the chance to go, but it's been four years since the last one. I've had to turn this trip down for exactly the same reasons as the last one which makes me feel sad as it shows there has been no improvement in that time. In fact things are much worse now. We not only have the incontinence and sleep problems to worry about, but also the fact that we would be worried sick about her getting hurt. She fractured her ankle stepping off a very small stage during a school concert, the school didn't even know she was hurt.how could we be sure she'd be ok away from home. Lucy is fine with not going, part of her would like to join in, but she knows she wouldn't be able to cope away from home.

Which brings me to my worries about secondary school. I know we have chosen the right school for now, but I'm really not sure how she is going to cope. All along I've said we will have to give her the chance of a normal school life, but if it goes wrong we'll take her out and find another option. Now, I'm concerned so much about the if it goes wrong part. If it did, would it be something she'd ever get over even if we did intervene?