Is it in the Genes?

Elher's Danlos Syndrome can be inherited. It also has several types many of which can be recognised by a person's genes. This is why Lucy was referred to a geneticist, to see if the condition runs in the family and to see if she could possible have one of the other types of Elher's Danlos Syndrome which could cause her more problems in the future. 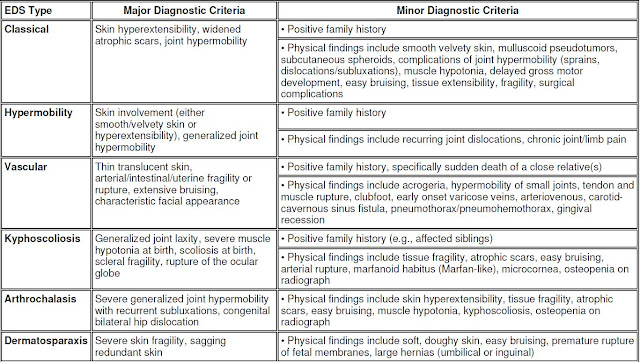 Lucy is currently suspected to have Hypermobility type EDS.

Last week we had our first visit with the geneticist. Lucy was given a physical examination and as well as her hypermobile joints it was discovered that she has a slight curvature of the spine. She will also need her heart scanned and her eyes tested.

Her full history was taken, as was the relevant history from family members. Particularly from my side of the family. We already know that two of her sisters and her little brother are hypermobile. I am also hypermobile, or I was until I suffered from TM.

We were told that the process could be very long so we won't be expecting answers soon. It's really good to know that she is being cared for properly now though. Whatever is found, if it's bad it will be found in good time to make sure she has the proper help and treatment. If it's not so bad, then we can be more relaxed about the future.

In other news, Lucy has had her mobility allowance stopped. It doesn't surprise me as the bar has been risen for applicants. When we first applied she had to be unable to walk a certain distance without pain, now she has to unable to walk, or virtually unable to walk. I've been pressured to appeal, but as Lucy seems to be doing quite well at the moment I don't need to stress too much. There is a chance that she could get even better, or a lot worse, but at the moment I'm happy that she's coping. She's even managing to walk to school and home, not without complaint, but she's managing it.