We've Been on Holiday!

Last week we took a break to Blackpool. I'm lucky that Lucy is a good traveller as we had to go by train, with a changeover on the way. I was in my wheelchair which added extra difficulty but we managed fairly well.

A few years ago while on a long train trip, Lucy managed to do her thing and soiled herself. I had to open her suitcase on the train and throw her soiled clothes away. I was concerned she was going to do this again so we had a little chat beforehand and she promised she would do her best. Which is all I can hope for really. As an extra precaution I provided her with a pad.

She did it! In fact she stayed clean all holiday which sounds incredibly exciting (well it does for me) but in actual fact she was really constipated. So we had a week of tummy aches and bloatedness but no movement. I'm sure you'll be pleased to know that she got it all moving over the weekend when we were home! *sigh*

Apart from the poo issues, and the not feeling well, and the very snotty nose that got through two boxes of tissues, we had a good time away.

And there was the incident where she wanted to play in a pool on the beach and was asking to remove her socks and shoes. She kept asking and I kept replying 'don't take them off yet'. Her Dad was busy getting me out of the wheelchair and I wanted him to be with the kids when they went into the water. However, being Lucy she took me literally. I didn't want her to take her shoes and socks off, so she went into the pool with them on.

She did totally astound me in the swimming pool when she had the opportunity to go into a huge bubble on the water, it's called Water Walking. She loved it and got very competitive when it came to racing, I was really surprised, but also very happy. It was £4 well spent.

She also enjoyed the pottery painting that we did. She chose a dragon and painted it as a character from a game she plays, Undertales. She gave the dragon a lab coat and lab glasses. 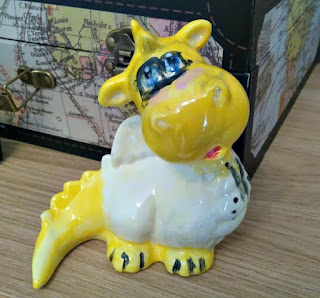 She did not like the club, it was too noisy, too smelly, too loud, too dark, too much sensory input which drove her crazy. We only went once for a very short time and decided not to go again.

She loved the circus and the Sea Life Centre, she absolutely adores clowns and informed me " a lot of people are scared of clowns but I'm not." In the Sea Life Centre she looked at everything, read every notice and poster and made sure she completed the tasks required to get her passport stamped.

I think she really enjoyed the break, it's a shame she wasn't feeling so good, but on the whole it didn't stop her from having fun. She really is a little Star sometimes.