Lucy was first admitted to hospital in August. She had been diagnosed as having a rotary subluxation of the atlanto occipital joint. Now, I had no idea what this meant at first, other than it was a bone in her neck that had moved. 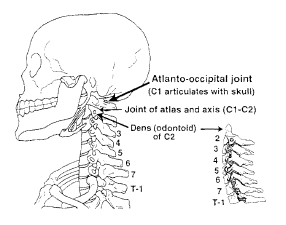 The atlanto-occipital joint is the top join of the cervical spine which connects to the skull. It is very rare for this joint to move, it is slightly more common for the atlanto axial joint to move, especially when involved in an accident. My little girl did not have an accident, the bone moved by itself, probably due to lax muscle control holding it in place. I'm still not completely sure why it moved, neither are the doctors, but I do hope to find out.

First the doctors talked about manipulation, then they talked about traction. They spent five days locating a traction bed for Lucy, then changed their minds. In the end we were sent home with a Miami J collar and regular physio appointments. The only treatment she had been given in hospital was muscle relaxants in the hope that her neck would just spring back.

We came home and really nothing had changed except that with the collar on the pain was not so bad and Lucy was able to eat and drink again. We went for physio therapy every week. There was no improvement but we managed to keep her neck from completely stiffening up.

Thirteen weeks after we had first taken Lucy to the hospital she was given another CT scan. We were told to stop physio therapy and keep the collar on all the time. We then waited and waited to be seen by the hospital. I had to call and make a fuss before they finally found time to see us.

Lucy was given another scan and then admitted for a manipulation. We were told that she may have a Halo Collar fitted while in the theatre. It wasn't until a few weeks later that we learnt that the joint had continue to move out of position, from the first scan to the last it had moved just over 2 mm, in total it had moved 4 mm.

When I went to see Lucy after she came out of theatre she was very distressed and horrified by the halo. It really is an awful contraption, but it is something you get used to. Lucy was amazing, her initial distress soon passed and she has just got on with things. She was in a lot of pain for the first couple of days, and the anaesthetic had made her sick, but she was soon up and walking about, she has been so brave.