The Halo is Removed

On Monday March the 3rd, after exactly thirteen weeks, Lucy had her halo removed.

Daddy took her to the hospital while I got her sister to school. I figured I should just about make it to the hospital in time for her to come out of theatre. Thanks to traffic I was five minutes late, and Lucy wasn't happy with me. Not the best of starts, but she soon forgive me.

The removal was quick, probably only took about 20 minutes with her being under anaesthetic. The pin wounds are clean and look like they will heal quickly and well. I was told that with adults they do not bother with a general anaesthetic to remove an halo, but it's better for children because it's less distressing and less risk of the child moving or trying to move while they are taking it off.

I was surprised to see that Lucy's skin looked fine under where the vest had been all this time. You can't wash under the vest, just wipe with a baby wipe or damp flannel. I thought she might have been marked or wrinkly but she just looked normal.

Lucy woke up hungry and the nurse fetched her some toast and squash, which she devoured. She seemed a little quiet at first, which is understandable, but she was soon her smiley self.
At lunch time we were asked if she would like to go to the playroom as they were having party food for lunch. I got Lucy out of bed and took her to the bathroom before dressing her. It seemed strange putting 'normal' clothes on her again. She has put on weight, so it looks like I'll be shopping again. We walked the length of the ward to the playroom and Lucy chose some food. We sat at the table but she said she felt all wobbly and wanted to go back to her bed. I think she was out of bed a total of fifteen minutes. She did eat and drink a little more though.

The nurse caring for Lucy told us that she just had to have an xray, and drink one more glass of squash and she could be discharged. We went for the xray around 3pm by which time Lucy was feeling a little pain and looking pale. The nurse decided to take her in a wheelchair rather than make her walk. By this time I was getting worried that Lucy just wasn't doing as well as we thought. Her head was floppy and she was sticking her chin out, which is something she does when she's in pain. As usual, when asked if she was ok she gave her usual reply, 'I'm fine'

I have to say at this point that Lucy's nurse this day was really brilliant, she was so attentive and told us what was going on all the time. Despite being an incredibly busy day she never left us for more than half an hour and listened to everything we said. So when I told her I was worried that Lucy wasn't acting like herself, she actually listened to me.

The Doctor came around and said Lucy's xray was good and she could go home. He said she should be sitting up though, and not in bed anymore. So I took her out of bed and she sat in the chair watching some tv. Then her nurse came to take her candula out and Lucy started vomiting, everywhere, tons of it. She was crying and complaining of headache, not like Lucy to complain at all so she must have been feeling really rough. The nurse said to put her back in bed and we were to delay going home for a couple of hours at least.

Thankfully, Lucy wasn't sick again, and after a dose of medicine her headache cleared up and she regained some colour. She was refusing to eat anything, scared of being sick again. The nurse said she'd be happy if she just kept a cup of squash down.

At 7pm Lucy had perked up a little, she'd kept her squash down and was talking to me again. The Dr came and said it was ok for her to go home, so the nurse finished the paperwork and we got ready and left to spend the night in our own beds.

As we were leaving the ward, literally just about to go through the door, Lucy's consultant was just coming in and he saw Lucy and said 'no, no, no' My heart sank, I thought he meant he wanted her to stay in. He took off her coat and then the collar and carefully straightened her neck before putting the collar back on. Her neck flopped again. He said 'the xrays were good, her bones are straight, but they will come out of place again if she can't keep her neck straight. The collar she has is not strong enough to hold her neck straight, and Lucy's tendons are not strong enough. I'm not sure what is going to happen, but we have to keep telling her to straighten up and keep our fingers crossed that we can buld up strength in her neck to hold her head up again. She can't start physio for two weeks as it's too risky, so it's going to be down to us and Lucy to try and keep her neck in place.

We have been referred to a rhuematologist for Lucy's hypermobility. I want to know if it's her loose tendons that caused the slipped discs in the first place. I also want to know if it can be prevented from happening again. My biggest fear now is that it can't be prevented and Lucy has what is known as cranial instability...i.e. her neck isn't strong enough to hold her head. Only time, and the doctors, will be able to tell. 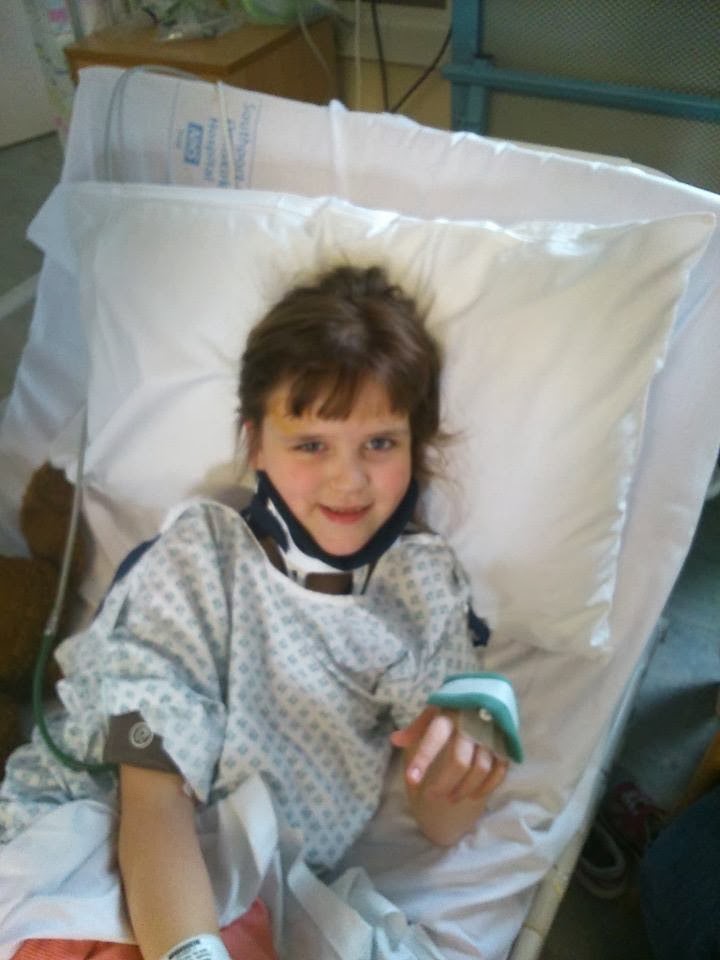