A Night At the Theatre

Last night I too the girls to see a live performance of Jaqueline Wilson's Hetty Feather.
We've been to live shows before and the girls have loved it. So far we've seen The Gruffalo's Child, Room on the Broom, What the Ladybird Heard and Andy and Mike's Tick Tock Time Machine. Lucy has coped really well, she doesn't mind being around lots of people, she doesn't mind loud noises for a limited amount of time, she enjoys the shows and interacts well. The only time I have had problems with her it wasn't a live show but a 4D movie...which included smells..that's her weak point, she doesn't like strong smells.

So we went along to watch Hetty Feather just like a normal family. I was a little worried because we were going to the evening show which finished past the girls bedtime. Leila gets tired and Lucy doesn't like her bedtime routine changed. The show was also just over two hours long, which seemed a long time to expect Lucy to sit and watch. She can watch a whole movie, but just about and most movies are only about an hour and a half. The extra forty five minutes of this show were going to make a difference.

Well, she didn't do too badly. She really enjoyed the show and was completely attentive from beginning to end.

She breaks the mould of what people expect from autistic children when it comes to empathy because she cried at all the sad parts. Well, I say cried, she sobbed, I had to sit hugging her as she cried her little heart out, I had to keep reassuring her that it would be a happy ending. It was a happy ending, and she cried at that too. I have seen her cry at things before, but it's usually involved animals. She did cry with happiness at one of the High School Musical films the first time she watched it. So, I'd say she was empathetic, very much so. Even if she has little control over how she expresses herself, at least she is expressing the correct emotions at the right times.

When the show stopped for the interval she knew it was past bedtime and insisted that we went home right then. I told her that it would be a shame to miss the second half and we wouldn't know what happened. She didn't seem to care. So I told her that if we went home right then, we would still be late for bed, so why not watch the rest of the show anyway. She wasn't happy with that but did see my point.
Finally, I persuaded her to stay if I bought her an ice-cream. This made her happy. Just like a normal child.

As soon as the second half started she was totally engrossed again.

They were both really tired but completely fired up when the show finished. As I said before, it had been a happy ending and Lucy had cried, probably a little too much, but she said she was really happy. Then we got up to leave and before we had left the auditorium she started talking about Pokemon. It was like we had not been to see the show, she didn't want to speak about it. All the way home she talked non-stop about Pokemon, Mario and Sonic the Hedgehog. So much so that my head spinned. Leila was trying to talk about the show and what she had enjoyed, but she wouldn't listen and didn't want to take part in the conversation. In fact, even when I spoke to Leila, Lucy just carried on talking about Pokemon et al. On the way home Leila sat with my niece who had come with us and ended up falling asleep on her after they had chatted about their favourite bits of the show. Normal.
Lucy talked all the way home, not mentioning the show at all. It was as if she couldn't think about it because it had affected her so much, so she talked about her favourite things instead. Not so normal.

At home we still had to go throught the normal bedtime routines even though we were nearly three hours late for bed. Eventually, she stopped talking about Pokemon, Mario and Sonic and went to sleep.

Today she has talked about the show, she remembers it all and told us her favourite bits. One part was when Hetty gets a spanking. We don't do physical punishment in this house so you'd think she'd be shocked, but the scene was performed comically and the very last spank was performed in really slow motion, which was quite funny to see being done live. This scene has been re-enacted by Lucy over and over and over and probably will be for days. (When I say re-enacted, there is no spanking involved, she just copies the faces and movements of the actors and they were when the last spank was performed.)

To us, she is normal, quirky maybe, but she's our girl and she's always been the same. The routines, the repetiveness, the randomness of her conversation topics, the incessent talking about what she wants to talk about even when no-one is listening to her, the lack of control over her emotions, to us, all normal, all Lucy.

She managed to sit through a two hour plus show and pay attention the whole time, she showed emotion at the right times, she stayed up past bedtime (although, not completely without complaint) and she enjoyed the evening. All normal, all typical for a child of her age.

People have pre-conceptions about autism, they often think that children can't sit still, always mis-behave, can't control themselves and so on. In fact, on the outside, a lot of autistic children can look just like other children, and behave just like other children. No-one on the bus home would have thought of Lucy as strange just because she was talking about Pokemon, they didn't know she'd be talking about them incessently for at least an hour, they didn't know that we'd just been to see a fantastic show and any other child would be wanting to talk about that, they didn't know that a lot of what she was saying would be repeated over and over and over. To them she was a normal, excited child on their way home to bed. 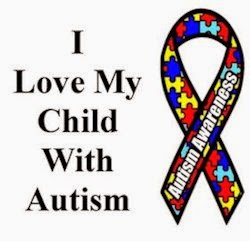 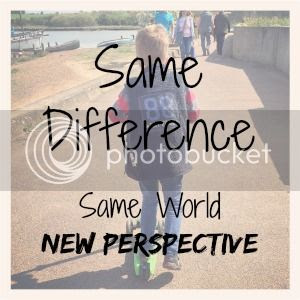