We had Lucy's hospital appointment on Monday. She was a bit disorientated going to different part of the hospital, when we got there she assumed we'd be heading straight to neurology. We waited in Outpatients for just over an hour and if I'm honest, Lucy handled the wait better than her dad who got bit grumpy!

The Doctor was nice, he was willing to listen and I'd taken two pages of things I'd written down for him to listen to. As you may remember (if you've ever read this blog before) our reason for going was to find out possible reasons for Lucy's fecal incontinence and maybe a solution. However, Dad seemed to have  different agenda and wanted to know if our suspicions of Lucy having Elhers Danlos Syndrome were right.

For the incontinence we had no answers. The Doctor said it was very unusual unless she was suffering from constipation. However, it was possible that loose ligaments meant that she could have little control over her bowels so it could be a possible effect of EDS. He couldn't help us but hopefully a specialist in EDS could.

So basically he was agreeing that Lucy did look likely to have EDS. He took some family history and checked over her joints, and her tummy.

She is now being referred to a geneticist for a proper diagnosis, a rheumatologist to help with pain management and a physio therapist. The clinic that she has been referred back to for physio is one she has been to before and it's the one where her psychologist works, so I'm thinking of booking her in for another chat with her as she is still on the system there.

So, it's all about moving forward. We have no miracle solution to the incontinence but maybe someone further down the line will be able to help. A proper diagnosis will help Lucy in the future, especially if she gets worse or other symptoms appear.

As for the pain, well that seems to be getting worse. When we went to the hospital we decided to visit Forbidden Planet afterwards, it's about 5 minutes walk from the hospital. When we got there we found the shop had moved and had a further 5 minute walk. Lucy barely made it and was complaining all the way. This was a shop she wanted to visit so she wasn't been dragged somewhere she didn't want to go, like when we had to go food shopping the other week with her and she couldn't make it around the supermarket. She did manage 30 minutes of play in the park one sunny afternoon last week though.

Night times are the worst and she is waking up most nights again now. It's usually her knees that hurt most and I have to give her painkillers and massage them. Sometimes her neck hurts but thankfully not too often, and occasionally it's her ankles and lately she's been complaining of her wrists.

We are lucky if we get five hours a night sleep now. 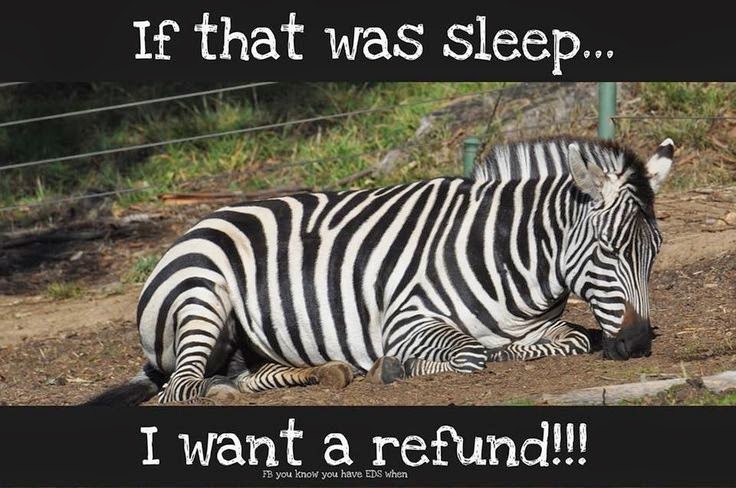