We were referred to several departments after Lucy's diagnosis of Elhers Danlos Syndrome to see what she needs and what help she can be given.

The first appointment through was for the physio therapist which was for  Friday. Then on Tuesday we received a phone call asking us if we could make an appointment with the rheumatologist on Thursday.

I'm glad the appointments worked out the way they did because visiting the rheumatologist first was a the best step.

The Doctor we saw was really nice. She spent about 15 minutes talking through Lucy's history asking me lots of questions. I'd written everything down but I didn't need to consult my paper because it's all etched in my memory. There is always a chance of the brain fog descending though, so best to have some guidelines. Then she asked if I had questions and mostly I just wanted to know if she agreed with the paediatricians diagnosis and if there was anything that could be done for Lucy.

She completed a  thorough examination of Lucy before answering my questions. Lucy scores 6/9 on the beighton scale for hypermobility. However, she does have other joints that are really hypermobile that the scale doesn't take into consideration. (As a point of interest, I score 7/9) We both score two major on the brighton criteria.

She pointed out that Lucy had a mis-aligned ankle on her left side and asked me if she'd had an accident. We are not aware of her hurting her ankle. She thinks it can be corrected with shoe inserts and has recommended that Lucy sees a podiatrist.

At the end of the diagnosis she went through her findings with the information given by the Elhers Danlos Syndrome Organisation and agreed that Lucy does have EDS hypermobility type.

She recommended Lucy seeing a physio therapist but I told her that Lucy already had an appointment for the next day. She is also referring Lucy to a gastro specialist for her bowel problems.

Overall the visit felt positive. It felt like a step in the right direction and that Lucy was going to receive some help.

The next day we saw the physio therapist and the experience was a little different.

Lucy was not feeling her best and complained every time she was touched. Maybe all the stretching and poking the day before had left her feeling sore? The physio was doing practically the same things but I have never heard Lucy say ouch so often. She never normally complains, even when she was at her worst with her neck she would only admit to pain if we asked her.

I had told the physio that Lucy had been given a diagnosis of EDS but she didn't seem impressed. She said a lot of Lucy's pain could be put down to growing pains and had she grown much in the last few months....she's 9 years old, she's always growing! She's been growing since she was a baby so I guess all the pain she has had over the past 9 years are growing pains then?

She saw that I wasn't very happy with her comment, event though I didn't say anything, so she tried to make it sound as though she was only blaming some of the pain on growing..the pain in her ankles and knees. The rest was EDS, if that's what she had been diagnosed with. I had the feeling she did not believe that EDS existed.

She then went on to say that Lucy would need help to recover from her ankle injury...I hadn't said anything about her ankle...there has been no injury, surely I would know? I didn't argue with her, if Lucy needs help for her ankle she can have it. It's just a mystery as to why she has a bad ankle.

Finally she said that Lucy would be referred to a rheumatology physio therapist. Then she left the room to fetch some exercises for Lucy. When she came back she said she'd made the referral to a community physio therapist who would come to see Lucy at home.

I must say I found the whole experience with the physio therapist like a step backwards. I'm so glad we didn't see her first I think I may have been more upset.

In the meantime we are taking one day at a time. 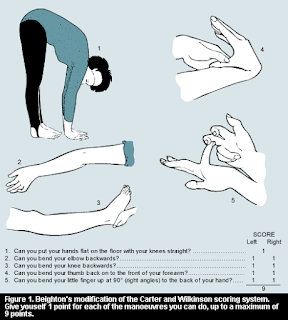