When Your Carer Gets Sick!

Both myself and my partner care for Lucy, she is definitely a two man job some days.
This year we have had to cope with more than our fare share of problems.
Lucy's Dad lost his Dad on December 30th. It was a huge shock and obviously the whole family is grieving.
Then on January 1st, I went into hospital with pins and needles which were so severe they made me feel numb. By teatime I was paralysed from the waist down and both my arms by a spinal inflammation and a rare condition known as Transverse Myelitis. I am recovering now, with most of my strength back but still no sensation, particularly in my legs which means I am not walking unaided.
So poor Dad has had to cope alone with all family issues, looking after Lucy and looking after me too! All this on top of his grief for his Dad and having to arrange the funeral.
But this is a blog about Lucy and I've observed how this has affected her.


She wouldn't visit me in hospital, having spent so much time in hospital herself she avoids it when she can. Dad did manage to bring her once (I was confined for twelve days in total) and she sat with her coat on backwards and the hood over her face. She cuddled me like this too, saying that she didn't like me smelling like hospital. Her main sensory disorder is smell, she is very sensitive to it and there are some smells she really can't stand. I think mint is the worst. She wouldn't stay very long so it was lucky that her uncle (And Godfather) was present and he took her out to the shop while Dad and her siblings stayed a little longer. This was her autism and how she deals with things.

The lady in the opposite bed to me on the ward had an autistic nephew who was higher on the spectrum than Lucy and non-verbal. He was happy to be on the ward though and played happily with the toy his mother had brought with her to occupy him. Then she took him to the toilet which was past my bed and he spotted some chocolate on my table. He made a grab for it and when his mum stopped him he went into complete meltdown. His mum had to take him off the ward until she could calm him down. I would have happily given him my chocolate but it wouldn't have taught him anything. Even non -verbal autistic children need to learn right from wrong. It was obvious his mother agreed.

Comparing the two children, Lucy and this little boy, you could see very different aspects of their autism. Lucy does have similar meltdowns, and has done over very simple things, but she couldn't cope with being in the hospital, Whereas the little boy was coping quite well until the chocolate incident.

I think Lucy coped at home very well without me being there. That comment both hurts me a little but also makes me feel confident that she'd be okay if anything serious did happen to me so it's also a relief. Since I came home she's been quite happy continuing in her routine with her Dad and hasn't missed my input at all. In fact she barely takes any notice of me, not like the other two who have to come over for a kiss and cuddle when they get home from school. Lucy is more interested in her PC.

I have trouble getting up the stairs so I've not been taking the children to bed and the two youngest have complained a little. Not Lucy though, she hasn't even mentioned it. The first night I was home and had been helped to bed by her Dad, Lucy woke up like she normally does and came to me for help to re-settle her. I couldn't get out of bed so I had to call Dad to help. Lucy hasn't bothered me since.

So, although things have changed it's not affected Lucy as her routine is still the same. It hasn't bothered her that it's not me doing things for her so long as it's done.

I believe she is coping a lot better than I am! 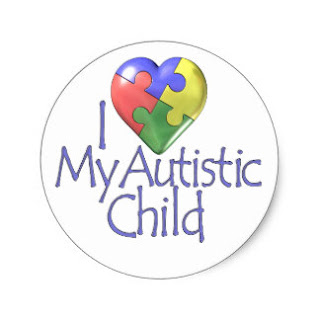