Report from the Geneticist.

Today we had an initial report from the geneticist we saw in February.
It says that she looked at Lucy for signs of a connective tissue disorder. She found that she has some mild facial features of a connective tissue disorder, a mild curvature to her spine, her skin was soft and she had lax ankles but her overall joint hypermobility score was only 2/9.

She believes that Lucy's history is in keeping with a diagnosis of hypermobile EDS but wants to exclude other connective tissue disorders. She is requesting a heart and eye assessment.

Lucy has long limbs, long fingers and toes and with her facial features and curvature of the spine it looks like she may have Marfan Syndrome. This could mean problems with her heart in the future and this is why she needs a heart assessment.

We've never really thought there was any reason to think their was anything wrong with Lucy's heart or eyes. However, I can see why the Dr wants them tested, and if it is decided that she has Marfan Syndrome then they will keep an eye on her heart.

I'm not sure how I feel about all this. I was happy that we were referred to the geneticist because at the end of the process we should have a definitive diagnosis. I really thought that she had hypermobility type EDS and I was looking for confirmation of this. It surprised me that she wasn't found to be as hypermobile as we thought. She could still end up with this as her final diagnosis as she does have some hypermobility and has suffered subluxations.

We knew that it was possible that she might have a different type of EDS which is why we thought it would be good to find out now rather than later. To be forewarned is to be forearmed, so they say. Now I find myself struggling to know if I will be able to cope if there is something more serious to be worried about.

There is some cross-over between kyphoscoliotic EDS and Marfan Syndrome, and genetic testing can be done to find out if either of these are present. With either one there are physical features which lucy is showing as well as some hypermobility. Both of them can present cardio problems and eye problems.

After all she has been through already I'm hoping that her physical features are just coincidence and that nothing else is found. 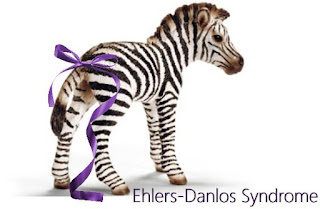