I've realised that I've focused a lot on Lucy's problems in this blog and I have kind of neglected talking about her autism. This week has had me thinking a lot about it.

I normally love the Easter Holidays but I have to admit that the past fortnight have been the worst holiday yet. It doesn't help that I have poor mobility and we no longer have a car so going out anywhere is more difficult. It's hard to get Lucy out, but when we had the car we could just bundle her in and she'd soon calm down. We have to get her to agree to go out on public transport, and she has to be feeling fit enough to cope with the walking.

So, we've spent a lot of time indoors and cabin fever has arisen. Lucy would be happy to stay indoors if she was allowed to spend the whole time on her PC, but we do have to limit screen time for all the kids. The girls have picked up a new  hobby of customising Littlest pet Shop figures. This involves using clay to make extra parts and painting the figures. I've spent a small fortune on paint, clay and the figures but it's helped to keep them occupied.

The problem is, Lucy gets frustrated really quickly if things don't quite go right. Then she takes her frustrations out on her sister. Her sister has taken to screaming a lot as her defense and to be honest it feels like hell has been let loose.

The girls also had a lot of homework to do over the holiday. Her sister managed to complete hers, but Lucy has barely touched hers despite several attempts and with me helping her all the way. She is worked up about the SATS that she has to sit in May and the way the school is putting pressure on them to do well. She is having to stay behind to school for two hours three times a week to prepare, along with the rest of the class. Well, I should say, the rest of the class are staying behind and Lucy SHOULD be staying with them. She is refusing most days.

The school have made arrangements for her and a few other 'problematic' students to sit the tests in a separate room to ease the pressure on them. We have also had to take a set of spare clothes in, secretly, so that she can change at school if she has an 'accident.' She normally comes home, so she won't be happy if it does happen. It just makes me feel sad that this has to be done.

I'm thinking now whether hoping to keep her in mainstream as she moves on up to secondary school is just a pipe dream. In reality I have no choice as there is nowhere else for her to go. She's not autistic enough to go to a special school, and if she did, would she ever achieve her full potential. One difference I have noticed between Lucy and her Aspie older brother is that he was much brighter at school. He didn't find the work difficult, just coping with the school day. Lucy doesn't cope with either. I know she's not dumb, but she refuses to learn sometimes. I was trying to do her maths homework with her and she was just not taking any of it in. I know maths was never my best subject, but if you don't listen then you don't learn, and Lucy just doesn't listen. She is much better at English, she reads perfectly and understand everything she reads. But she doesn't like writing, and English involves a lot of writing.

One of the advantages of being at a 'not very good' school is that there are a lot of children just like Lucy there, but is that a good thing. It means she doesn't stick out like a sore thumb, like her brother did. But it also means that she has not learnt anything about controlling her behaviour to even begin to try and fit in. She complains about being bullied, but when we question her we can see that it's not bullying. She says the other girls don't like her and make fun of her, but her teacher says otherwise, and we've asked her to keep an eye on them. Ok, maybe the teacher doesn't see everything but Lucy does seem fairly happy at school. She just likes to keep us on our toes with her complaints.

The sleeping problem continues. Even her little brother goes to bed on his own and to sleep without any bother. Lucy, however, has us taking her back to bed for at least three hours after initially taking her up. Even then she always ends up in the spare bed in our room. We are going to remove that bed soon. We only had it for her little brother while we were sorting his room out (Which was the last room to be done after we moved in.) However, since she's been coming in our room we've been reluctant to get rid of it because it has saved us from getting up time and time again throughout the night. Not only that but I can't actually keep getting up as it's far too much effort for me to get in and out of bed now that I am disabled, so it's all down to her Dad. We do need to remove it though, she has to learn to stay in her own bed.

So, that's where we are right now. She's struggling with school, with sleep and with maintaining a relationship with her sister. Her meltdowns are becoming more frequent and she thinks everything revolves around her. She never understands how her behaviour hurts or upsets others.

We should be seeing the psychologist again soon, although we don't have an appointment yet, then maybe we can talk about how things are going and work out a plan to help her. I may even give the clinic a call and see if she can be fitted in sooner. We definitely need to talk to someone before  she goes to secondary school. 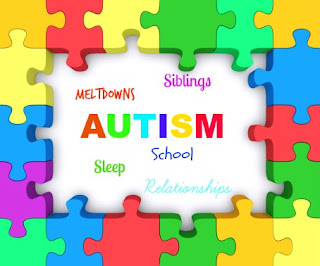