Lucy's Neck and Other Problems

I'm feeling a little concerned about Lucy's neck. While brushing her hair last night she said her neck was sore. On observation I noticed that there was a lump at the base of her scar. It has always been raised there but now it seems more so and she said it was painful when I touched it. 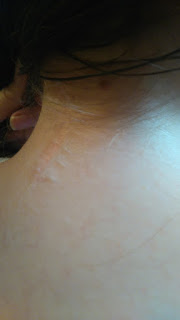 It's hard to see in this photo, but I took it so that I could keep an eye on it and compare it. If it gets any worse I will push to see her consultant sooner. If the soreness doesn't stop I will take her to the GP and see where we go from there.

She had a CT scan on her neck just a few weeks ago, so if there was something wrong surely they would have noticed and contacted me. Sadly, I know this is not always the case, she's had scans before and the consultant has not even looked at them until her appointment. She is seeing the consultant in August so we will know for definite then.

In other news she is being seen in the cardiology apartment this month for a check on her heart. This was requested by the genetics dr we saw in February as she thinks Lucy might have Marfans Syndrome or another form of Elhers Danlos Syndrome rather than hypermobility. Lucy has already had her eyes checked and they came up clear, so maybe her heart will too. Fingers crossed.

She is also having trouble with her mobility again. We noticed when we were on holiday that she wasn't getting very far without hurting and it seems to be getting worse. She's complaining whenever they have to walk anywhere at school, for example they walk to the local public library which is about half a mile away. Even if we are doing something fun she will complain, it's becoming more regular.

Her gastric problems are not getting any better and she has had several accidents in school over the past few weeks. I was so hoping we could have had this sorted before September, but it doesn't seem so far away now.

Finally, her sleeping pattern is really bad again and I reckon she's currently getting about five hours a night :(

That girl is nothing but trouble  sometimes x